First all civilian space mission to launch this Wednesday 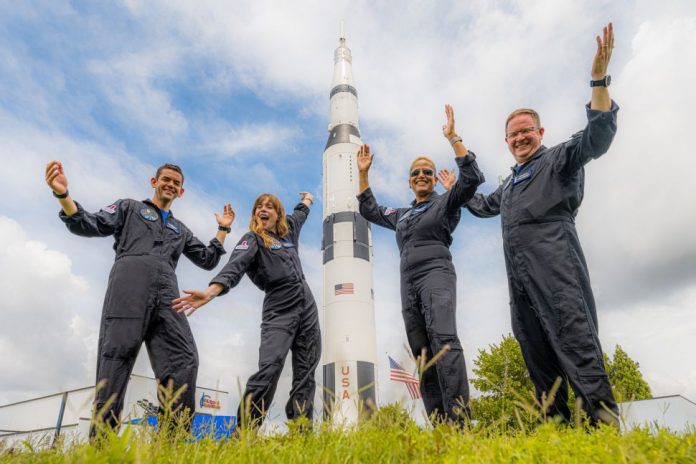 SpaceX’s first all-civilian launch is set to take place on Wednesday (Sept. 15), conveying a message of diversity as part of the third billionaire-led trip planned to take place in 2021.

Four private individuals will sail aboard a Crew Dragon spacecraft for an Earth-orbiting trip as part of the Inspiration4 project.

The trip was purchased by billionaire Jared Issacman, creator of Shift4 Payments, as part of an effort to raise millions of dollars for St. Jude Children’s Research Hospital. Haley Arceneaux, Sian Proctor, and Chris Sembroski join him.

In 2021, Inspiration4 will be the third billionaire to fly into space. The flight of Virgin Galactic founder Richard Branson and company employees aboard the Unity 22 mission on July 11 and the flight of Blue Origin founder Jeff Bezos and three other passengers boarded a New Shepard spacecraft on July 20 were the other two — both suborbital missions.

Inspiration4 is primarily made up of civilians with no professional space expertise, similar to the other two flights, however the crew has received rudimentary training to get an idea of what to anticipate. In contrast to Bezos and Branson’s brief suborbital flights, the team will spend three days circling the Earth this time. Find out more about the flight in the sections below.

Inspiration4 is set to launch on Wednesday, Sept. 15, at 8 p.m. EDT, within a 24-hour launch window (midnight Sept. 16 GMT). In the days running up to the launch, mission authorities will provide a more precise launch time.

Launch timings are typically affected by factors such as space traffic and weather at both the launching location and any adjacent emergency sites. Inspiration4 will be launched into space on a SpaceX Falcon 9 rocket, just like the other Crew Dragon missions. However, unlike earlier Crew Dragon missions that have flown to the International Space Station, the Inspiration4 mission will not dock with another spacecraft during its orbital journey.

Those who want to see the launch at NASA’s Kennedy Space Center Visitor Complex must purchase tickets in advance online. Check out NASA’s launch watching guidelines for a list of other nice sites to watch the launch for free.

Each of Inspiration4’s four crew members was chosen to symbolize one of St. Jude Children’s Research Hospital’s “pillars” of support: leadership, hope, generosity, and prosperity.

Shift4 Payments founder and CEO Jared Isaacman (“Leadership”), 37. Isaacman has acquired about 6,000 hours as a private pilot. Isaacman has a lifetime ambition of traveling to space and stated in talks with the media that he intended to do so while also donating additional seats to deserving individuals. He will be in charge of the flight.

Hayley Arceneaux (“Hope”), 29, is a physician’s assistant at St. Jude Children’s Research Hospital and a childhood bone cancer survivor from Louisiana (who was also treated at St. Jude as a child). Isaacman chose her to represent the organization for which he intends to generate funds. She will be the first person with a prosthetic limb to fly in space. Arcenaux was personally invited to join the expedition as its chief medical officer by Isaacman.

Chris Sembroski (“Generosity”), 42, a Lockheed Martin data engineer from North Carolina. Sembroski is a long-time space lover who has explored in astronomy and rocketry as a hobby. He is a former Space Camp counselor and, like many astronauts, a United States Air Force veteran. Isaacman sponsored a contest to generate money for St. Jude, and Sembroski was the winner. He will be assigned to the role of mission specialist.

Sian Proctor (“Prosperity”), a 51-year-old geoscientist and scientific communicator who has been on four space analog missions. Proctor was named the winner of Isaacman’s Shift4Shop competition, which required contestants to create an e-commerce site and film a video promoting their company. Proctor’s “Space2Inspire” business sold postcards and prints of her AfronautSpace artwork to encourage people to talk about women of color working in space. Proctor will be the mission’s pilot and the first person from Guam to travel in space.

The mission has two goals: to inspire people and to perform science in space. According to the Inspiration4 website, the spacecraft’s route above Earth will pass over around 90% of the world’s population. The crew also intends to conduct experiments “intended to extend our understanding of the cosmos,” with the objective of allocating the “greatest feasible mass” to research above and beyond what the crew requires to live and survive in space. The study will help initiatives “that would otherwise be unable to surmount the high hurdles of traditional space-based research,” according to the website.