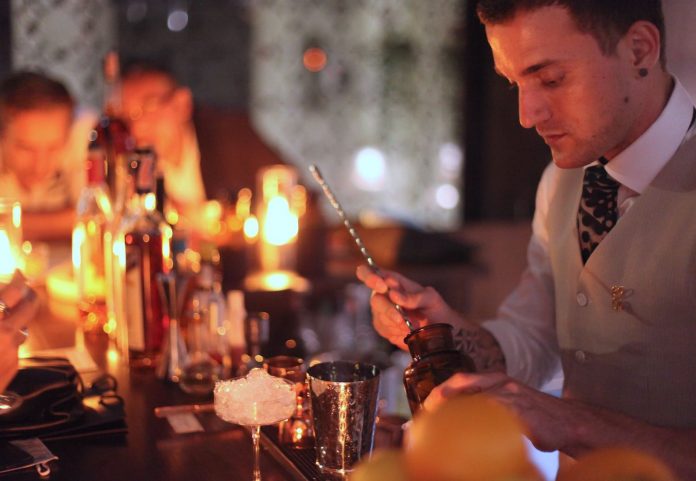 Touch down Sukhumvit at its liveliest time of the day! Tonight we will take you to a cocktail lounge and savour drinks like never before. Specialising in Armagnac, Exquisite Elixir offers a wide variety of cocktails made with Armagnac imported all the way from France.

Is Armagnac a sort of Cognac? Should the letter ‘g’ in Armagnac be silenced? Chill out guys, you might not be the only one who is lost right now so let’s sip this in together – nice and slow. Armagnac is a distinctive kind of brandy produced in the Armagnac region in Gascony, southwest France. And yes, the ‘g’ in Armagnac is as useless as the one in lasagna.

This magical night is a cocktail creation showcase. All cocktails on the menu are Armagnac-based drinks which are developed by the houseguest mixologist Konstantyn Wulf. As an adventurous liquor admirer, the owner of Exquisite Elixir was impressed by his mastery to create perfect blend out of any customs, said “He has a flare when he works with spirits” so Konstantyn was invited to develop drinks from Armagnac, house’ specialty. For each drink, Konstantyn came up with the process, ingredient and name himself. He eventually came up with over 20 menus from Armagnac but only some are chosen for the showcase today. Let’s have a look!

Louis Louis tastes just like the drink name, it is a glass of a party, friendly, and it’s french. Your night could perfectly end with Louis Louis, if you want something quite intense and strong. Konstantyn wanted to do something like a Martini. Normally, Martini with Vodka are quite floral and light in terms of taste. Armagnac is relatively rough and has a lot more character. Louis Louis was quite challenging as Martini is something smooth and soft. It is why Louis Louis is a twist on a dirty martini and gibson martini.

In line with its name, Martinique is more tropical like the island itself. Konstantyn adds passion fruit, tangerine juice and orange liqueur to freshen up Baron de Sigognac VSOP. The reference is that Martinique is known for its superb rum. He wanted Armagnac to act like a rum, which comes out pleasingly fine.

If you are looking for something sour. With its fruity taste and floral notes, Poppy Field might be the way to go. Poppy Field suggested itself as something fresh, it mixes with cranberry, raspberry, peach lemon juice. The girls would not want to miss this one for sure!

The name Bleeding Heart of the drink comes from Exquisite Elixir’s handcrafted liquored cherry. It resembles bubbles that float  from cherry’s pit when Champagne is poured into the glass, like a heart bleeding. That’s why it’s called “Bleeding Heart”

About Exquisite Elixir It all started with the owner’s affection for Armagnac. She firstly came across Armagnac in a hotel bar years ago and fell for its redolent odour. It smells like aromatic pear brandy with a hint of delicacy.

Armagnac is not so common in Thailand as much as other types of alcoholic drinks like wine or cognac, so she decided to launch Exquisite Elixir, in order to make Armagnac accessible for A-admirers in the country. Today, it offers 9 varieties of Armagnac brands from each area of Gascony.